The Space and Time engineering team is aggressively building out the capabilities of Proof of SQL™: novel cryptography that allows the data warehouse to generate a SNARK cryptographic proof of SQL query execution, proving that query computation was done accurately and that both the query and the data are verifiably tamperpoof.

The process consists of two types of interactions: proof ingestion, and query requests. 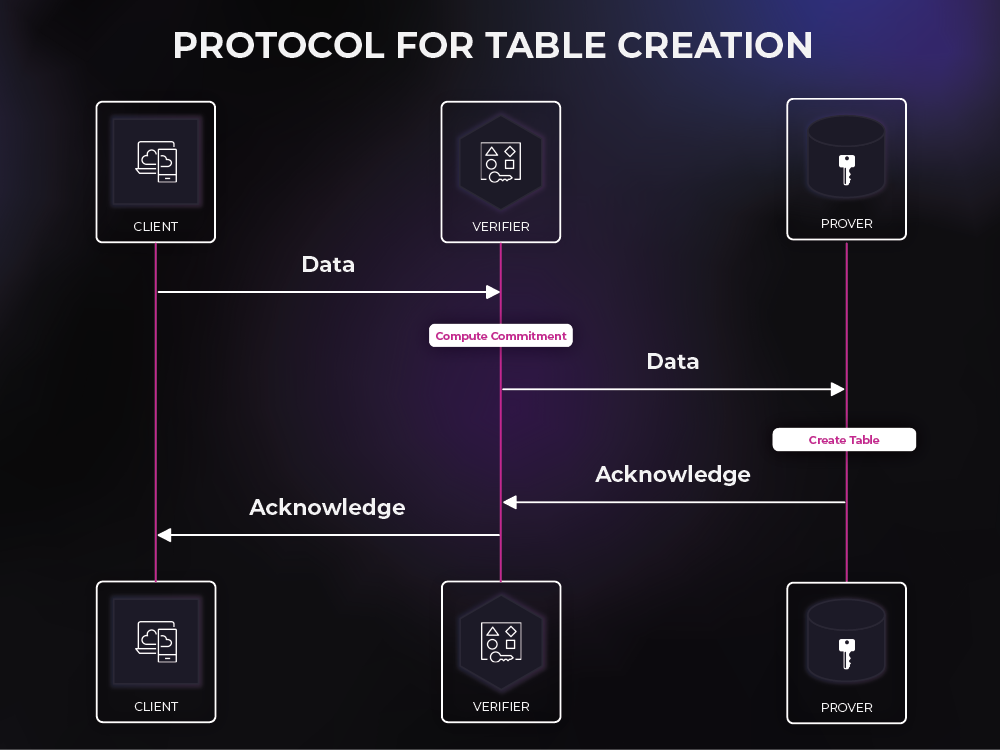 Note: at no stage of this process does the prover need to do anything other than accept and store incoming data. 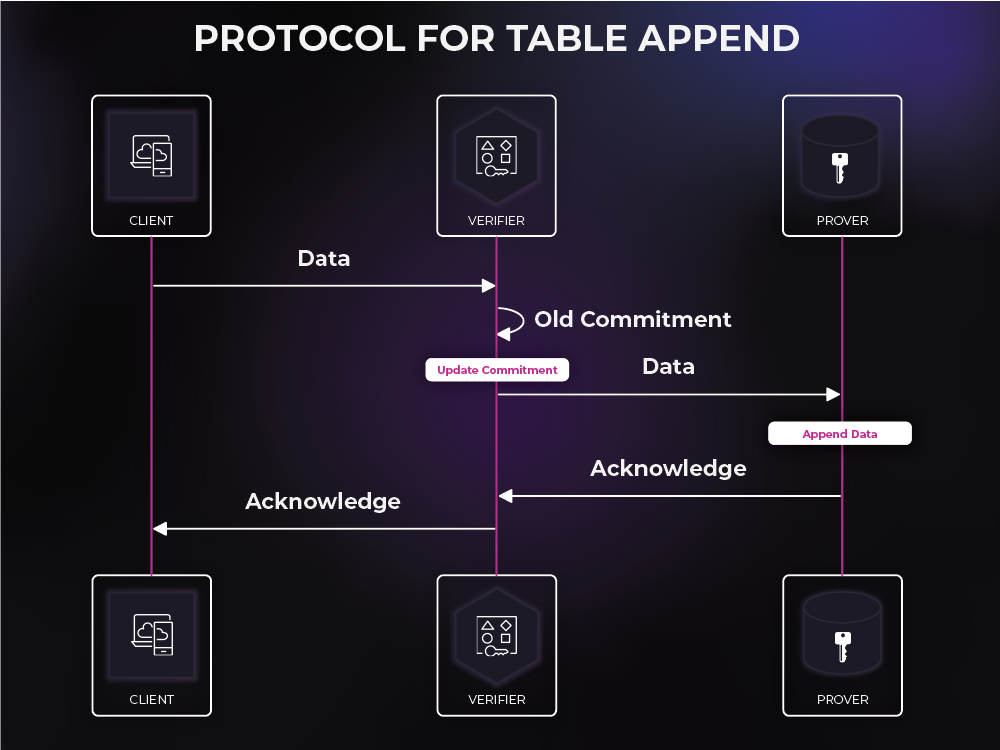 When a service or a client sends a query request, that request is routed through the Validator to the prover, which is the database. [Because the Validator plays the role of the verifier, the verifier is routing the request. However, this isn't strictly necessary, and the request could be routed directly to the prover without even opening the packet.] At this point, the prover parses the query, computes the correct result, and produces a proof of SQL. It then sends both the query result, and the proof to the verifier.

Once the verifier has this proof, it can use the commitment to check the proof against the result and verify that the prover has produced the correct result to the query request. This query result can then be routed back to the service or client along with a tamperproof success flag. However, if the proof does not pass, the verifier does not route the result, but sends a failure message instead. 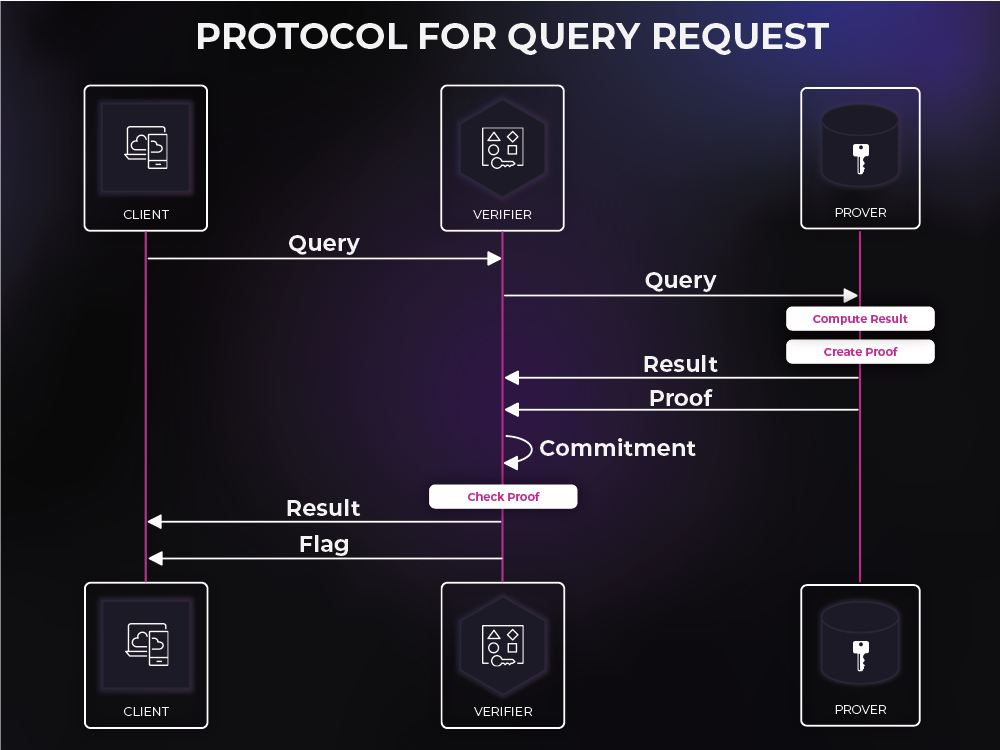 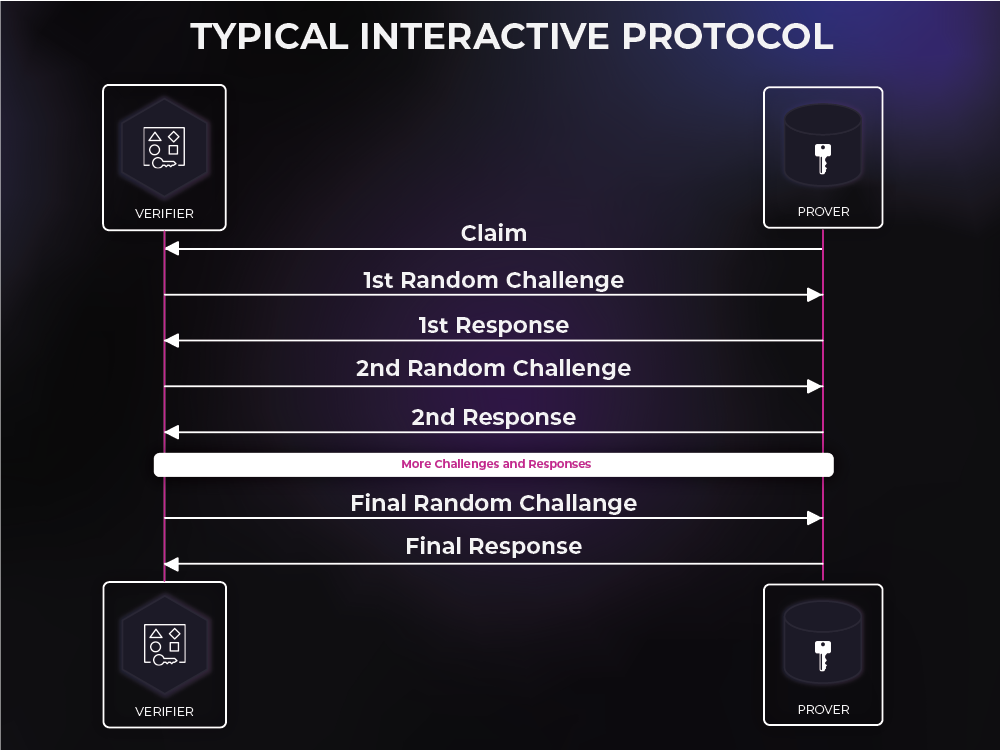 This multi-round interaction between the two parties would lead to extreme latency problems, especially for more complex queries. Fortunately, this problem is solved by the Fiat–Shamir heuristic, which works by essentially allowing the prover to simulate the entire interaction. In this situation, the prover generates the random challenges, but by the design of the heuristic, still cannot learn the challenges before "sending" the claim. This allows us to utilize the power of random challenges while still allowing the prover to only send one message in response to the verifier. 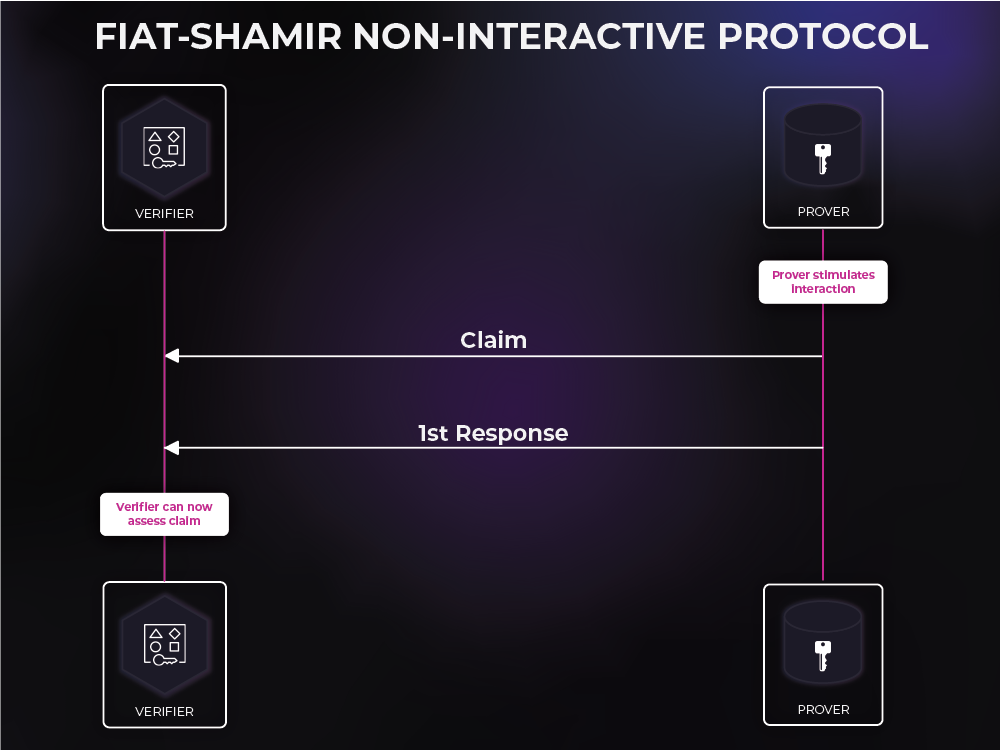 A Pedersen commitment is a simple construction, which lends itself to faster development, and shorter time to market. It also has nice mathematical properties, which simplifies other components of the protocol. As a brief introduction, suppose a0, a1, a2,… is a column of data. Then, the Pedersen commitment is simply a0⋅G0⊕a1⋅G1⊕a2⋅G2⊕⋯ where the Gi's are "random" public parameters. Of note is that these Gi's are transparent parameters and don't require a trusted setup phase, as is required by some other commitment schemes.

As mentioned in the overview, an important design constraint is that these commitments should be updatable. All that needs to be done to append to a commitment is to add an extra term to the above sum for each new piece of data. [Other schemes are updatable but may require a more complex architecture.]

While Pedersen commitments aren't the fastest commitments (FRI commitment are quite a bit faster) to compute, we have made some choices so that they are still fast enough. Many commitment schemes rely on a choice of an elliptic curve. Because we need fast computation times, we are using Curve25519 for our first version because it is one of the fastest elliptic curves [The reason to use another curve would be if we wanted to use protocols that required elliptic curve pairings. This is helpful, but the cost is that pairing-friendly curves are significantly slower.], and it has a strong reputation in cryptography. Additionally, because the structure of the commitment is very repetitive, computation can be easily parallelized. As a result, we are pushing the computation of these commitments to GPUs, which can compute them 100-1000 times faster than CPUs.

A final note should be made about the opening scheme we are using for commitments. Because asymptotic verifier time and proof size isn't as important for the SQL tamperproofing application, we can use schemes that aren't as succinct as most other applications require. This means that we can use schemes that are both simpler and require less round-trip time. For these reasons, we have chosen to use the commitment scheme that Bulletproofs use [We are not using the surrounding bulletproof protocol, just its PCS.]. This is an attractive option because it is a well-tested, open-source system that we can use quickly. However, as with almost everything else in this section on commitments, this is effectively a "black box", so it is likely that as our product evolves, we will exchange this scheme for a commitment scheme specifically tailored to our use case.

We will walk through an example where the client creates a table, appends to it, and then queries the table.

The client sends the following data to the verifier to create a table with some data.

The verifier accepts this data and computes the commitment to each column. In this case, these are:

The verifier then stores these commitments and sends the data to the prover, who creates a new table in the database.

Suppose the client then sends the following new rows of data to the verifier.

Rows to append to Employees table:

The verifier accepts this data and updates the commitment to each column. In this case, the new commitments are:

The verifier then sends the new rows to the prover, who appends them to the table in the database.

Finally, the client decides that it want to know the total compensation. So, it sends the following SQL query to the verifier.

Employees table along with total compensation:

The verifier receives this result column from the prover. To verify it, the verifier must mirror the provers computation by taking the Pay commitment, multiplying it by 52 and adding the Bonus commitment. The happens to be exactly the commitment [Most operations are not this simple, and for more complex operations, a proof is required as well] to what the result should be, which is:

The verifier then also computes the commitment to the result that got sent from the prover. If the prover sent the correct result, this should be:

If the prover sent the wrong result, this will be something else. Then, the verifier checks to see if:

[By combining all of the previous equations one can see that these two should be the same]. If it does, the verifier sends the result to the client along with a flag that confirms that the result is correct. If the two values are not equal the verifier tells the client that there was an error [The verifier also should alert the network to the fact that the prover is potentially malicious].